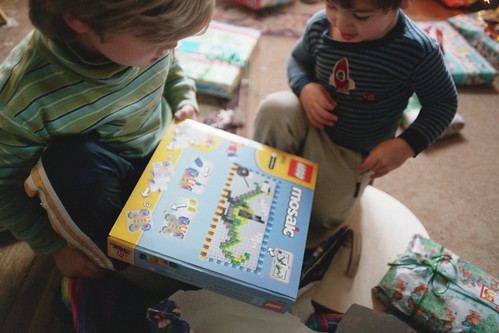 It is a joyous time of year, that morning of Christmas when people open up their gifts around the tree and scream with joy at items they have wanted for a long time. The gift opening is the culmination of a stressful time for gift-givers, from asking people what they want on their Christmas list to going out and getting the presents.

Christmas gifts for kids are among the easiest to get crossed off a list. There are so many choices these days, from toys to videos – and yes, clothes. Every kid’s list should have a little variety, even though the list will likely be a mile long.

The old standby of video games always pleases kids of all ages. Little children may appreciate Disney-themed games or Mario Brothers, while older children may be interested in sports-themed games like Madden football, MLB The Show or others. There has not been a new video-game system introduced in a few years, but the old standby consoles like Xbox 360, Play Station 3 and Nintendo Wii still thrill kids to this day.

Don’t worry about kids getting fat by just sitting down and playing games. Nintendo’s Wii system and the Kinect module for Xbox feature games that require boys to get up and move around. Whether it be fake skiing down a mountain, bowling down a simulated alley or throwing a make-believe football to a receiver, any movement is good movement.

It used to be a lot of parents didn't think kids needed a cell phone. With the advent of family plans that help parents and children keep in touch, phones have gotten less expensive. Most “smart” phones also are more advanced than before, with apps that include little games and web access to sites popular with children. The IPhone and Droid are two of the more popular phones, but it isn’t necessary to get either and satisfy a child. There are many other choices out there.

Outdoor games, especially in warm-weather climates that allow kids to play outside, are popular with kids. Slip-and-slide water systems enable kids to run up and slide down a wet platform. Try out new ideas like mixing games, using water with tag, nighttime sneaking around games - be creative!

Videos, compact discs and clothes are among other gifts that are popular with boys, but since most boys subscribe to the cliché of going absolutely bonkers when they see a favorite toy under the tree, toys are prominently featured in most Christmas advertisements.

When you ask your child what he wants for Christmas, chances are he will rattle off plenty of ideas. You might think your wallet will shrink, but the odds are plenty of inexpensive choices will make your boy happy.