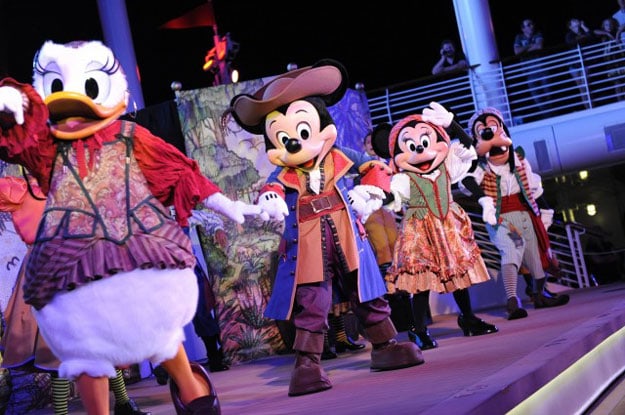 Like never before, Disney Cruise Line takes cruise ship entertainment to new heights: Performers soar and surf over the stage in aerial maneuvers … Pirates rappel from atop the ship’s funnel during a swashbuckling adventure … The evening sky lights up with a dazzling display of sound and color.

On the Disney Fantasy, entertainment is designed to charm and bedazzle the entire family. Guests delight to some of the most elaborate original musicals presented at sea, over-the-top deck parties and, bursting above it all, the largest fireworks spectacular aboard a cruise ship.

Every night is show time at Walt Disney Theatre, an elegant, 1,340-seat entertainment palace that is at once classic and ultra-modern. Spanning three decks with orchestra and balcony seating, the theater is resplendent with art deco styling recalling luxurious show places of a bygone era. At the same time, it is equipped with theatrical technology that makes it one of the most advanced venues on land or sea, bringing original productions and Disney stories to life in a whole new way.

The lineup of musicals presented at the Disney Fantasy Walt Disney Theatre includes “Wishes,” “Disney’s Aladdin – A Musical Spectacular,” “Disney’s Believe,” “A Fantasy Come True” and “An Unforgettable Journey.” Here’s a look at what’s in store: 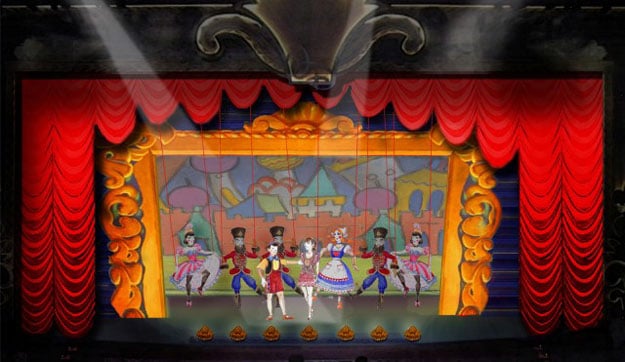 A new ship means new main stage entertainment at the Walt Disney Theatre, and “Wishes” is a spectacular production debuting on the Disney Fantasy. This signature show is a 45-minute musical journey about three best friends who discover the secret to being a grown-up is staying connected to their inner child.

The story begins as long-time best friends Kayla and Nicole along with Nicole’s twin brother Brandon visit Disneyland to celebrate their high school graduation. Each is unsure of what the future holds for them, so they make a wish to go on the “Ride of Our Lives” – the show’s original opening number.

Their wish evokes an enchanted world where a cavalcade of Disney characters – including Rapunzel, Flynn Rider, Lilo, Stitch, Mulan, Hercules, Pinocchio, Timon and Pumbaa – materialize to guide the teens through their magical journey.

Full-scale production numbers and special effects bring excitement to the stage as the cast of “Wishes” performs original songs and classic Disney tunes with a contemporary twist. Notable moments include:

In the final act, the trio celebrates their extraordinary journey at a graduation party as the pop tune “Breakthrough” from the Disney Channel original movie “Lemonade Mouth” keeps the revelry going. 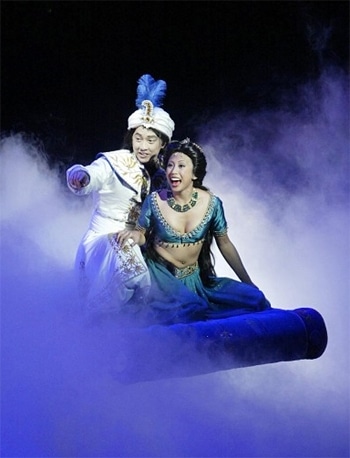 New to Disney Cruise Line, “Disney’s Aladdin – A Musical Spectacular” takes the stage on the Disney Fantasy. During this Broadway-style production, guests laugh along with the wise-cracking Genie and the characters from the classic animated Disney film “Aladdin.”

In this fast-paced musical comedy, Aladdin is back as the “street rat” of Agrabah meeting a Genie who grants him three wishes, battling the evil Jafar, and falling in love with Princess Jasmine.

Classic scenes and songs from the movie are re-created on stage – and some of the action even spills out into the aisles, like Prince Ali’s jubilant arrival in Agrabah on the back of a stallion. Magic lamps, wise-cracking genies, princesses and evil wizards are all part of this musical production.

And of course, an Aladdin production would not be complete without a magic carpet scene. In this spectacular, mechanical wizardry and state-of-the-art projections combine to send Jasmine and Aladdin soaring as they perform a heartfelt duet of “Whole New World.”

Many of the songs from the movie are featured in the 45-minute musical production, including “Friend Like Me,” which is performed as a lively, Las Vegas-style production number featuring special effects, illusions and more than a dozen dancing genies. Composer Alan Menken, who created the original soundtrack with songwriters Howard Ashman and Tim Rice, composed an original song for the stage production entitled “To Be Free.”

“Disney’s Believe” is a stage spectacular that combines a heartfelt story with a captivating musical score. The lavish production tells the story of a workaholic father who, through the power of Disney magic, reconnects with his daughter and learns a valuable lesson about what is important in life.

“Disney’s Believe” takes guests to the garden of Dr. Cornelius Greenaway, a brilliant botanist obsessed with cultivating his precious plants. Dr. Greenaway is so preoccupied with his garden that he overlooks the birthday of his daughter, Sophia. Saddened, Sophia makes a special birthday wish and the impossible happens: Genie from Disney’s “Aladdin” appears to make her wish come true.

Joined by a host of characters, Genie takes Dr. Greenaway on an enchanting journey into the world of Disney stories. Through spirited production numbers, Dr. Greenaway learns that magic is real and is embodied in his beloved daughter.

More than 20 of Disney’s most beloved characters take the stage during “Disney’s Believe,” including Cinderella, Peter Pan, Mary Poppins, Belle (“Beauty and The Beast”), Rafiki (“The Lion King”) and Princess Tiana (“The Princess and the Frog”).

“A Fantasy Come True” is a 45-minute, high-energy, multimedia musical production that follows one family’s journey as they discover the amazing experiences and enchanting surprises that await them aboard the Disney Fantasy. Ultimately, they learn the greatest experience the ship has to offer is the opportunity to make memories – together as a family – that will last a lifetime.

“An Unforgettable Journey” is a good-bye hug in the form of a 45-minute musical production that allows guests to reflect and savor the experience they have had onboard the Disney Fantasy. This farewell show connects the guests’ experiences to the man who started it all – Walt Disney – through audio and video clips that steep the memorable moments and distinctly Disney touches in Walt’s words and wisdom.

In addition to nightly stage productions, Disney Cruise Line brings the upper decks of the Disney Fantasy to life with incredible live entertainment.

The fun begins with “Sailing Away,” a “welcome aboard” show starring Mickey Mouse, Minnie Mouse and the Disney gang. The show is a celebration of the fun aboard a Disney cruise, building to the exciting sounding of the ship’s horn.

On a special night each cruise, the entire Disney Fantasy transforms into a pirate ship with a night of events brimming with buccaneer fun and a fireworks spectacular.

The evening kicks off on the Donald’s Pool stage with “Mickey’s Pirates IN the Caribbean,” a family-friendly interactive show featuring the famous Disney characters. Guests become members of Mickey’s Pirate Crew as they participate in a series of pirate-themed musical numbers.

Later in the evening, Jack Sparrow from the “Pirates of the Caribbean” films makes a special appearance on deck in “Hunt Fer Jack,” a thrilling live-action pirate showdown which culminates in “Buccaneer Blast” – a spectacular display of piratical pyrotechnics.

As the night rolls on, a high-tech, open-air dance party on the upper decks of the ship heats up. Guests unleash their inner pirate and dance their boots off during “Club Pirate,” a family-friendly bash featuring electrifying music, stunning visuals and special effects.

The only cruise line to feature fireworks at sea, Disney Cruise Line ups the entertainment ante and lights up the sky with a fireworks extravaganza.

As part of the pirate night celebration, the skies above the Disney Fantasy explode with brilliant colors during “Buccaneer Blast.” With more “bang” than ever before, the pyrotechnic spectacular is choreographed to a dramatic score featuring songs from the “Pirates of the Caribbean” movies.