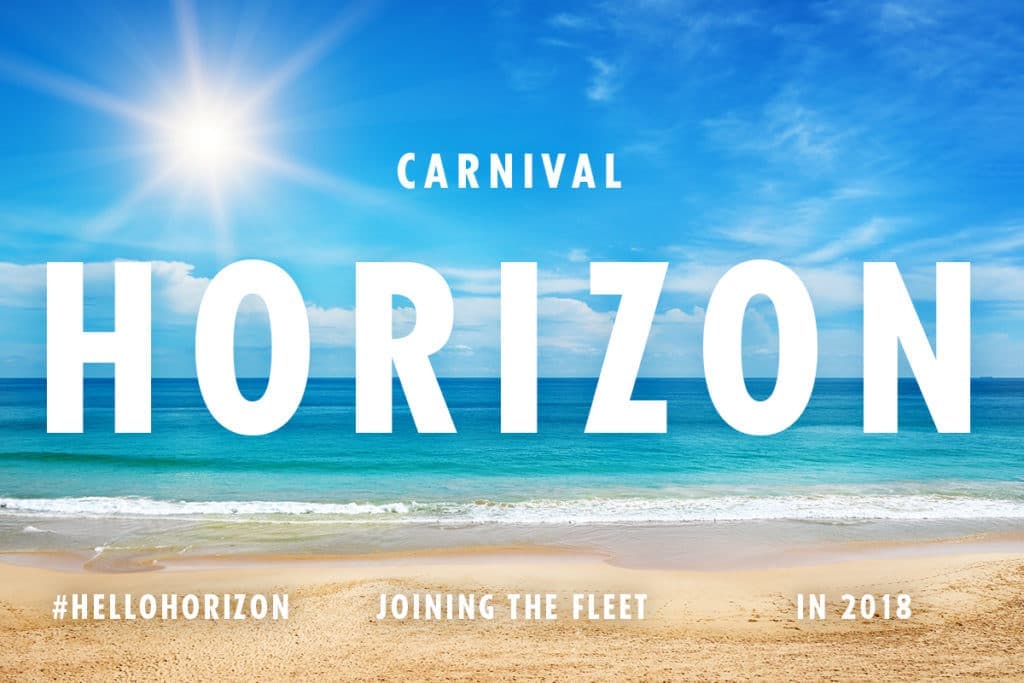 Carnival Horizon is currently under construction at the Fincantieri shipyard in Marghera, Italy and is set to debut in April 2018. We still don't have a lot of info about the 3,934-Passenger ship, other than it will feature all of the most popular dining, bar, entertainment and activity options that debuted on Carnival Vista, Horizon's sister ship, as well as a variety of unique dining and bar concepts and outdoor spaces (soon to be revealed!).

The good news for today is that we have the ship's initial itineraries, which include European voyages followed by Caribbean sailings from New York and Miami. Take a look:

Carnival Horizon will reposition to the U.S. with a 14-day transatlantic crossing departing Barcelona May 9 and arriving in New York on May 23, 2018. Five stunning European and Canadian ports will be featured: Malaga, Spain; Gibraltar; Lisbon, Portugal; and Vigo, Spain – Carnival’s first visit to the centuries-old seaside town – along with a stop at Halifax, Nova Scotia, Canada.

Departing on Thursdays, the 4-day cruises will feature a full-day visit to Bermuda where guests can relax on the island’s legendary pink beaches, enjoy snorkeling, kayaking and other water sports, and visit historical landmarks such as Royal Naval Dockyard and Gibb’s Hill Lighthouse, the oldest cast iron lighthouse in the Western Hemisphere. Five four-day Bermuda cruises will be offered, departing NYC May 24, June 21, July 19, Aug. 16 and Sept. 13, 2018.

After arriving in New York, Carnival Horizon will offer an exciting summer schedule of eight-day Caribbean cruises operating round-trip from the Big Apple and featuring visits to Grand Turk; San Juan; and Amber Cove (Dominican Republic). Departure dates include May 28, June 5, 13 and 25, July 3, 11, 23 and 31, Aug. 8, 20 and 28, and Sept. 5, 2018.

Carnival Horizon will then shift to Miami and kick off a year-round schedule of six- and eight-day Caribbean cruises beginning Sept. 22, 2018. Prior to the start-up of this program, Carnival Horizon will offer a special two-day cruise to Nassau from Miami Sept. 20-22, 2018. On its new Miami-based schedule, six-day cruises will depart Sundays, calling at Ocho Rios; Grand Cayman; and Cozumel. Two different eight-day itineraries will be offered with departures on Saturdays – one featuring Grand Turk; La Romana (Dominican Republic); Curacao; and Aruba; and the other visiting Grand Turk; San Juan; St. Kitts; and St. Maarten.

I'll be posting Carnival Horizon news and updates as soon as they're announced— stay tuned!

« Think It's too Late to Start Saving for College? Not with Florida Prepaid!
Skincare Adventures With My Tween Daughter »
4 shares