Leigh Caldwell of MidwestTravelMom.com attended the Embassy Suites #300 More Press Trip to Chicago on behalf of Mommy Musings. This is the third of several posts she will be sharing about the hotel and the attractions she visited. 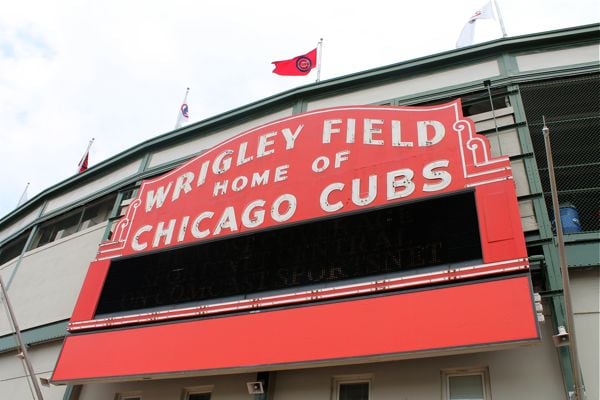 My daughter and I are big baseball fans. We love to go to minor league and major league games in cities we visit, and we especially love our local minor league team, the Southern Illinois Miners. But the baseball team closest to our hearts will always be the St. Louis Cardinals.

So, my daughter was slightly upset to hear that we would be touring Wrigley Field, home of the Cardinals' arch rivals the Chicago Cubs. She is serious about her Cardinals.

But when I explained how historic Wrigley Field is, she was all in, because one of the things she loves more than baseball is history.

It was a rainy day in the Windy City, but our tour guide Tom helped us make the best of it. It was interesting to see the grounds crew working on the tarp covering the field.

We toured Wrigley on a day when the Cubs were playing elsewhere. If possible, I recommend touring on a non-game day like this. Game day tours are also offered, but you don't see as much of the stadium because, obviously, more of it is in use on game days. 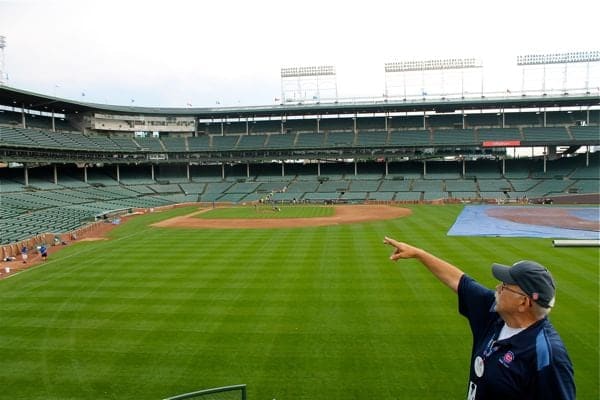 The sun came out shortly after our tour began. Tom took us all around the field, pointing out different facts. Here he's telling us what the flags around the top of the stadium are for. The Cubs are a bit famous, ahem, for not winning many pennants to fly up there, so the flags commemorate special dates and records at Wrigley. 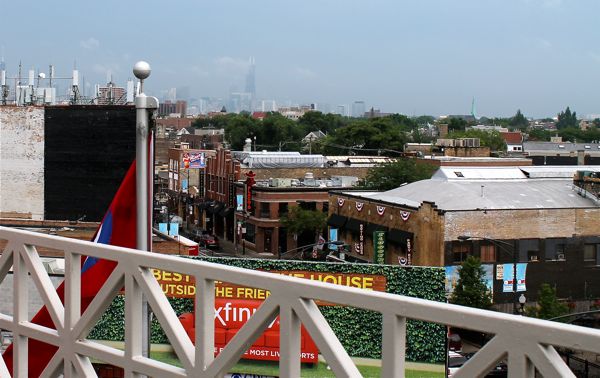 One of the more unusual things about Wrigley Field is that it is truly in the middle of a residential neighborhood. Most stadiums are in downtown areas, or set off somewhere, but not Wrigley. This gives the field a lot of character, and also makes some things about going to games there different, such as the fact that there are not nearly as many night games played there because the lights disturb the neighborhood. 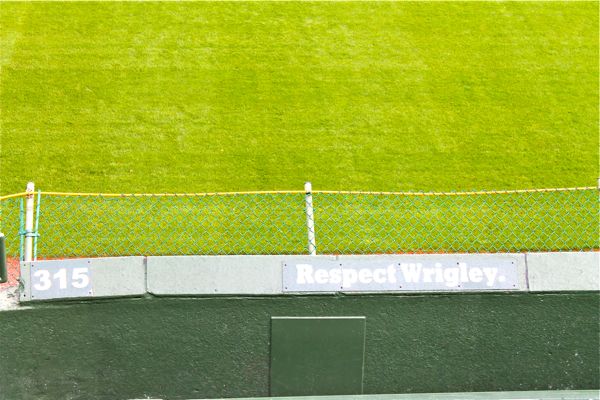 Some of the most entertaining stories Tom told us were about the antics of regulars who sit in the bleachers at Wrigley Field. I don't want to give them away because you should go take the tour yourself, but I will say that this net on the outfield walls, which I always assumed was there to catch balls, was actually installed to catch people! 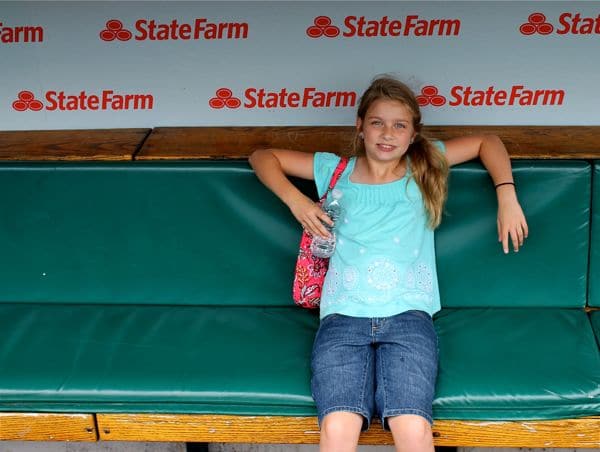 Grace's favorite part of the visit was getting to sit in the actual dugout. 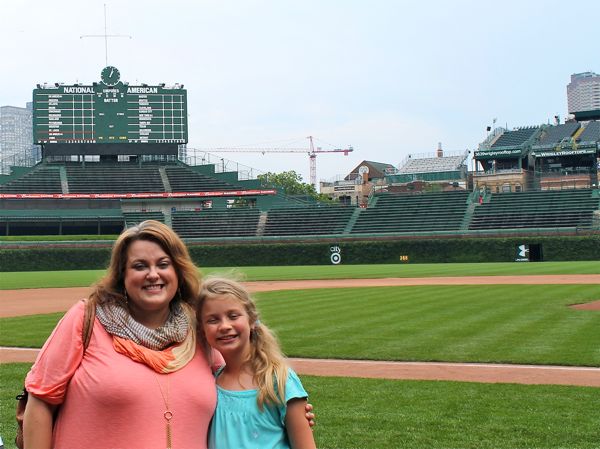 One of the things I found most interesting on the tour was learning about three things at the field that our guide Tom said could never be changed: The marquee outside (that is pictured in the top photo), the ivy on the outfield walls, and the iconic scoreboard behind us here, that is still manually operated by men who spend each game climbing ladders inside it.

We also learned about two staples of American sporting events that were started right there at Wrigley: concessions stands and the playing of the National Anthem before games.

I highly recommend the Wrigley Field tour for families visiting Chicago. Even if you are not huge baseball fans, it's a piece of history and a neat way to see things like a press box that you may never have seen.

Tickets for the tour run $25, and it lasts about 90 minutes. They happen at several different times a day. You should book in advance on the Wrigley Field Web site.

Disclosure: Embassy Suites paid for our Wrigley Field tour as part of the press event we were attending. The company also covered our transportation, hotel and some meals while we were in the city.

Mommy Musings™ is a participant in the Amazon Services LLC Associates Program, an affiliate advertising program designed to provide a means for sites to earn advertising fees by advertising and linking to Amazon.com
50 shares