Carnival’s culinary team developed the new dinner concepts, American TABLE and American FEAST, which will be offered during a pilot period, beginning December 8 on Carnival Glory, with some variation in the dishes to gauge additional guest feedback before rolling out the program fleetwide in the latter half of 2014 and 2015.  Other ships included in the pilot are Carnival Liberty beginning in January, and Carnival Imagination and Carnival Inspiration starting in February.

Here's a look what we can expect from American TABLE and American FEAST.

American TABLE, offered on Cruise Casual nights, is designed to evoke a modern restaurant experience with an emphasis on exceptional American cuisine featuring a mix of familiar regional, fresh and contemporary dishes.  Menus will change each evening and will feature an expansive array of creative and delectable appetizer, entrée and dessert choices.

Meals will begin with an extensive stand-alone cocktail menu featuring a variety of imaginative drink specialties such as the Raspberry Mojito, the Carnival Cosmo and the Sunset Serenity, which provide a unique twist on some favorite classics.  Featured wines will also be offered by the glass, in addition to a wide-ranging list of wines available by the glass and bottle.

The new American TABLE experience offers a full appetizer menu including selections such as Fried Calamari, which can be served family style for the table, as well as soup and salad options. Special selections called ‘Rare Finds’ for the more adventurous, such as Spicy Alligator Fritters and Frog Legs Provencal with Herb Butter, are available as well. 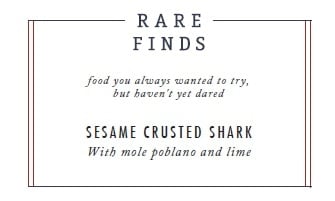 Entrée choices include expertly prepared pasta and poultry dishes such as Free Range Chicken with Salsa Verde and Charred Lemon or Cornmeal Crusted Chicken Breast with Black Bean, Corn and Tomato Salsa, as well as meat and seafood options such as Seared Tilapia with Capers and Parsley or Rosemary Braised Lamb Shank. Carnival favorites such as Flat Iron Steak with Pepper and Herbs, and Veal Parmigiana with Spaghetti and Tomato Sauce will continue to be offered as well.

“Port of Call” entree selections are inspired by the destination on the ship's itinerary that day.  For example, when calling at St Thomas, in the U.S. Virgin Islands, the day's ‘Port of Call’ entrees will include dishes such as Tropical Salad of Ripe Mango, Spicy Grilled Chicken Strips, Crispy Carrots and Red and Green Peppers on a Bed of Fresh Greens Drizzled with Tangy Raspberry Vinaigrette, and Island Chicken Curry with Potato Crisps and Sweet and Sour Mango Chutney. 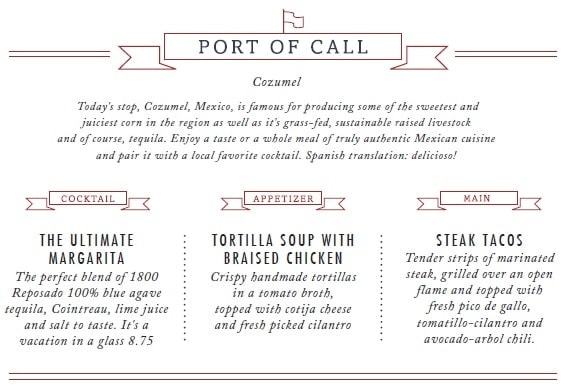 American FEAST, will also be offered in the main dining room one or two times per voyage on Cruise Elegant nights.  American Feast has been designed to create the feel of an elegant, elaborate special occasion celebrated by all guests in the restaurant with courses served table-side in elaborate style befitting the occasion.

The American FEAST menu features a full selection of tantalizing appetizers such as Mojito Cured Salmon with Minted Cucumber Slaw, and Crispy Crab and Corn Fritters with Pineapple, Coconut and Cilantro Salsa, followed by a savory pasta dish, served as the second course.  Guests then choose their entrée from a delicious selection of succulently prepared meats, seafood and vegetarian choices such as Slow Cooked Prime Rib, Broiled Maine Lobster and Miso Marinated Salmon Filet.  Spectacular desserts such as Sticky Toffee Brioche with Whipped Crème Fraiche, Chocolate Nib Crunch, Toasted Coconut-Lime and Strawberry Compote will top off the meal in style. 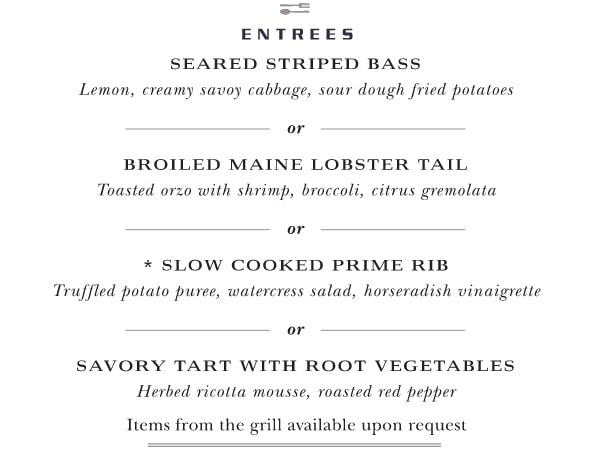 Doesn't everything sound delicious?  Personally, I'm most excited about the "Port of Call" menu. I can't imagine a more perfect way to end a day in port than with a dish inspired by the destination.

What item(s) look good to you on either the American TASTE or American FEAST menus?