My family loves Halloween and Disney, so it should be no surprise that we get giddy about Disney-themed Halloween Treats. When we visit the Magic Kingdom in October for Mickey's Not So Scary Halloween Party, we always make a stop at the Confectionery to gaze into the glass case filled with specialty caramel apples and cupcakes. This year I saw some ghostly Mickey and Minnie marshmallows that I just couldn't resist!

I know not everyone lives so close to the Disney Parks-- that's why I'm excited to share these Disney Halloween Treats that you can easily make at home. 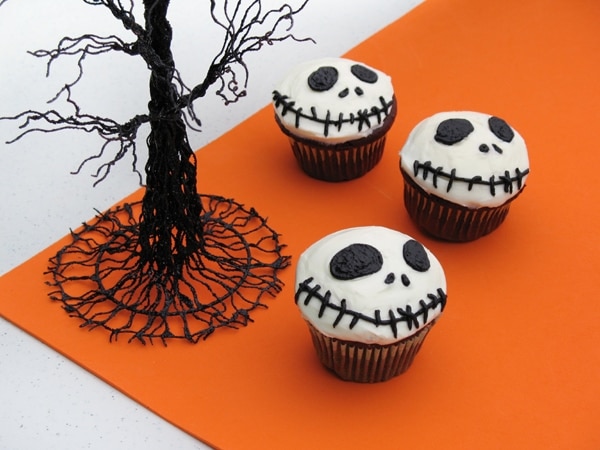 2. For each cupcake, use the tip of a toothpick to lightly etch the outline of two large Jack Skellington eyes in the frosting.

3. Slowly pipe black decorator's icing onto the etched lines and then fill in the inner circles. Use another toothpick to spread and smooth the icing.

4. Pipe on two short lines for a nose. Next, pipe a long line across the bottom of the cupcake for the mouth. For the finishing spooky touch, randomly top the mouth with a bunch of short icing barbs. 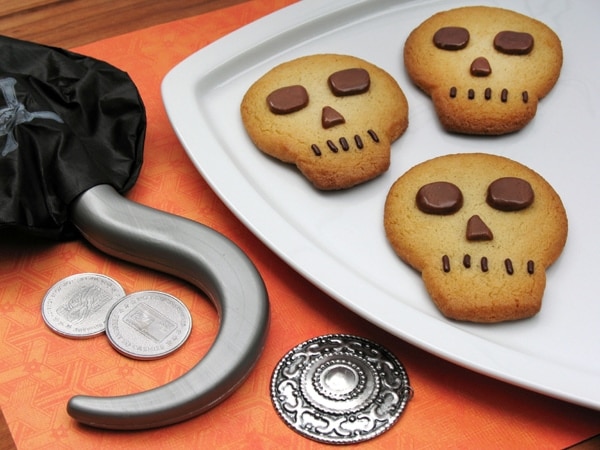 1. Slice the Tootsie Rolls into 1/8-inch thick circles to use for the skeleton cookie eyes. With clean hands, flatten and shape the circles so that they are slightly rectangular. Then set them aside on a piece of waxed paper.

2. For each skull, cut a 2-inch circle head and a 3/4 inch square jaw from the cookie dough. Place the jaw up against the bottom of the circle head and gently push the two pieces together until they stick. Lightly press 4 or 5 chocolate sprinkle "skeleton teeth" atop the jaw portion of the cookie. Then use a spatula to transfer the cookie to a baking sheet.

3. When the baking sheet is full, bake the cookies according to the recipe directions. (Note: If the dough has softened much, place the sheet in the refrigerator for a few minutes to stiffen it up again before baking so they'll hold their shapes.)

4. Remove the baked cookies from the oven and let them cool on the tray for a couple of minutes before transferring them to a cooling rack. While the cookies are still warm, top them with the Tootsie Roll eyes (the candy will stick to them as they cool). 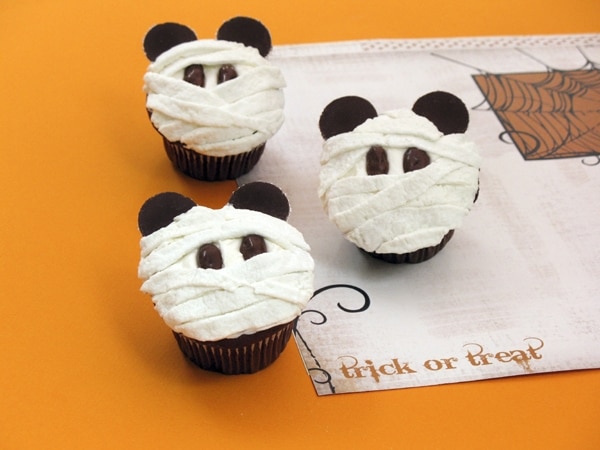 1. Working atop wax paper dusted with confectioners sugar, use a rolling pin to flatten a bunch of marshmallows.

2. Use kitchen scissors to cut the rolled marshmallows into thin strips. Set the strips aside for now.

3. Frost the cupcakes. Press a pair of nonpareil candies (white side down) into the frosting at the top of each cupcake to resemble Mickey ears. Then add a pair of chocolate-covered raisin eyes.

4. Randomly place marshmallow strips over each cupcake, leaving the eyes exposed, to resemble a mummy. Gently press the strips into the icing just enough to make them stick in place. When the cupcakes are sufficiently covered, use the kitchen scissors to trim the marshmallow around the perimeters, as needed.

Photos and recipes courtesy of DisneyFamily.com

Mommy Musings™ is a participant in the Amazon Services LLC Associates Program, an affiliate advertising program designed to provide a means for sites to earn advertising fees by advertising and linking to Amazon.com
420 shares