Turkey is a very popular tourist destination and flights are easy to arrange from almost any airport in the UK. Although much of the accommodation is all-inclusive and booked as a package it is perfectly simple to make your own arrangements, booking flights and accommodation separately. You can make some substantial savings this way and you can also choose which airport to travel from, something not always possible if you are part of a package deal. By choosing an airport handy to where you live you can include the convenience of leaving your car so it is ready for you when you get back – no one likes facing a long cramped coach journey after a relaxing holiday, so having a service such as meet and greet from Gatwick airport parking or Heathrow parking waiting for you is a great bonus. 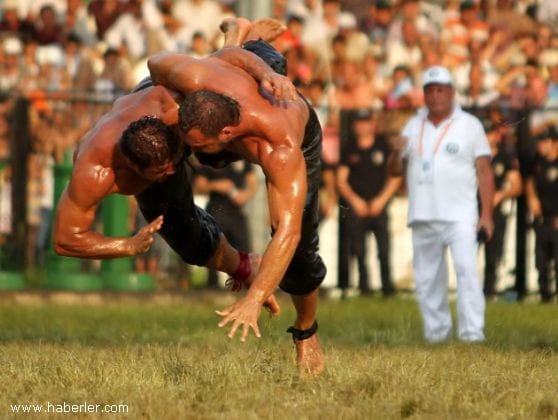 If you are heading to a holiday location near Edirne (which is on the European side of the Sea of Marmara just a few miles from the border with Greece) you should try and catch the Kirkpinar oil-wrestling tournament, which is definitely something you are unlikely to have encountered before. According to the Guinness Book of Records, it is the longest running sports competition in the world, having been going since 1346! Dates vary so you should make sure when it is to take place before you book, but it is generally held in late June.

In the West, Edirne was once called by the Greek name of Adrianople and the style of wrestling is known as Graeco-Roman. It might be less spectacular than some modern styles – fans of WWE and Smackdown! might find it a little tame, for example – but its antiquity is impressive and the skills displayed are all the more extraordinary because the contestants are covered in oil. It’s like wrestling with a bar of soap!

Contestants wear leather trousers which reach the knee and their bodies are totally smothered in oil. Bouts take place in a field, a reminder of the origin of the sport – it is, after all, a fight and the arena is a battlefield, no matter how stylised the moves have become today. The idea is to pin your opponent to the ground, so that his shoulders are flat or to lift him in the air; either move results in victory.

Oil wrestling can be dated back to as early as 2650 BC in ancient Egypt, Assyria and Babylon. A bronze statuette excavated at a temple at Chafadji clearly shows two wrestlers with olive oil vessels in their hands. It is likely that there was also once a religious element to this ritual. The Egyptian example comes from the tomb of Ptahhoteb of the fifth dynasty, near Saqqara, the possible burial site of Alexander the great. Since Kirkpinar has been going since 1346, it is very likely that someone who watched it in the 1440s was Vlad Dracula, later called the Impaler, who was a political prisoner of the Turks at Edirne during that decade.

It is not often that a holiday event can take you back into the stream of history as much as the oil-wrestling at Edirne can. It is undoubtedly huge fun to watch but the more imaginative viewer will hear the voices of antiquity shouting from the crowd and you will really feel the age of the continent beneath your feet as you enjoy the spectacle.