Home >> Entertainment >> Muppets, Moopets and Montages: 7 Reasons You Need to See The Muppets 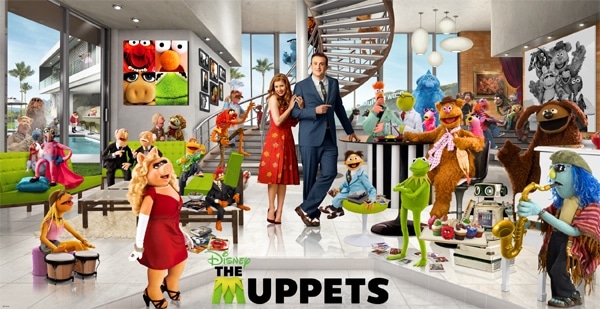 So we finally, FINALLY, saw The Muppets. Even a week late --Thanksgiving just got the best of us-- the wait was worth it and The Muppets was by far the best family film we've seen this year. From the moment the movie began to the second it ended we were hooked on Walter, Gary (Jason Segel), Mary (Amy Adams) and the rest of the Muppet gang.

Here's seven reason why you need to take your family to see The Muppets...like today!

1. The Muppets: It's been a long time since we've seen them and by the end of the film, you’ll wonder what took them so long to get back together. The movie begins with some vintage clips from "The Muppet Show" and you immediately realize this is going to be a welcome trip down memory lane. Kermit, Fozzie, Miss Piggy and the gang still have chemistry that immediately draws you in and you leave the theatre wanting more.

2. The Moopets: A new group of Muppets, who due to copyright concerns, go by the names Kermoot, Foozy, Animool, Roowlf and Miss Poogy. It's always great to see the integration of new characters and The Moopets DO NOT disappoint. As a tribute band (and villains), they provide some good laughs.

3. The Music: The music has always been a high point in any Muppet film and the tunes in The Muppets are truly fantastic. The filmmakers really captured the innocence, sweetness and sharp wit that was displayed in many songs from the previous films. They even gave me what I was craving to hear during the whole movie, a redux of "Rainbow Connection". That song still holds a special place in my heart and they did a wonderful job of keeping it fresh without messing it up or making it seem cheap.

4. The Montages: Another staple of the previous Muppet films were their montages. In The Muppets, 80's robot goes ahead and just throws it out there..."May I suggest we save time and pick up the rest of the Muppets using a montage!" It was a great way of giving a nod to the other Muppet movies and provided some good laughs as they rounded up the rest of the Muppet gang.

5. The Many Cameos – Jack Black, Dave Grohl, Neil Patrick Harris, Selena Gomez, Whoopi Goldberg, Mickey Rooney and Sarah Silverman were just a few of the many celebrities that made appearances throughout the film. My favorite had to be Jim Parsons' (Big Bang Theory) cameo as Walter's human version in a scene where they sing "Muppet or Man" along with Jason Segel. I almost died laughing!

6. The Multigenerational Appeal - Young or old, everyone can enjoy The Muppets! Whether you have been a long-time Muppet fan, or are just discovering the gang for the first time, the storyline is easy to follow and the jokes are clean-- it's hard not to fall in love with these guys.

7. The Maniacal Laughter – I don’t know what it is, but I just got a kick out of the “maniacal laughs” brought on by the chief bad guy, Tex Richman (Chris Cooper), and his two Muppet henchmen as they set out to tear down Muppet Studios and drill for oil. This, of course, is the main plot point, so you’ll just have to see The Muppets for yourself to see how it all plays out!

The Muppets couldn't have come together so beautifully if it wasn't for Jason Segel, who co-wrote and starred in the film. As a long time Muppet fan, Jason knew what would work with a new audience without compromising the spirit of the Muppets that we know and love.

Seriously, The Muppets is a must-see!