When I walked into the parks and resort presentation during the D23 Expo, I knew there was going to be news-- I just didn’t realize how big! As far as Disney announcements go, this presentation was EPIC! In all the years I’ve worked with Disney Parks & Resorts, from expansions to new rides and attractions, nothing has come close to what is about to happen to both Walt Disney World Resort in Florida and Disneyland Resort in California. So without further ado, here’s a look at what’s coming to the U.S. Disney parks.

All the rumors are true – Star Wars Land is actually happening! And the biggest shocker of all is that the new land will be built at BOTH DISNEY PARKS – at Hollywood Studios in Orlando and Disneyland in Aneheim.

Each Star Wars-themed land will cover approximately 14-acres, transporting guests to a never-before-seen planet with two signature attractions, including a customized secret mission on the Millennium Falcon and an epic Star Wars adventure that puts guests in the middle of a climactic battle!

This will be Disney’s largest single themed land expansions (ever!), so an official date of completion hasn’t been set. In the meantime, new and enhanced Star Wars experiences will be coming soon to parks on each coast. 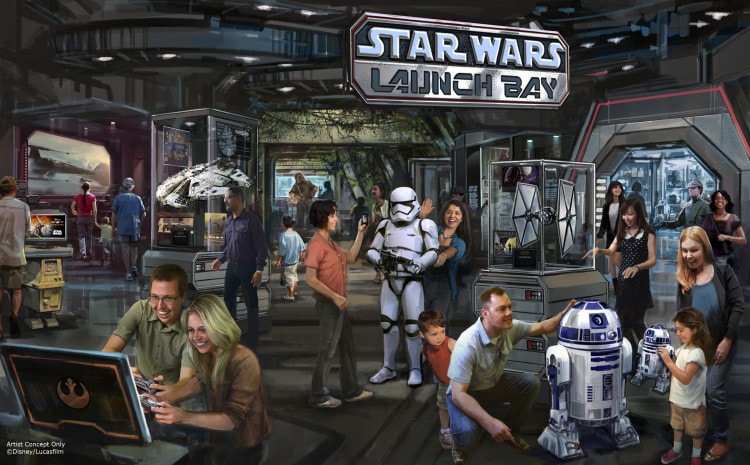 Star Tours – The Adventures Continue – Later this year, Star Tours will include a new adventure featuring locations and characters from the upcoming film, Star Wars: The Force Awakens, giving guests a new adventure in the Star Wars galaxy.

Star Wars Launch Bay will be located in the Animation Courtyard at Disney’s Hollywood Studios and in Tomorrowland at Disneyland park.  Also at Disneyland park, Star Wars Launch Bay will share the space with the reimagined Super Hero HQ, featuring opportunities to meet and take photos with super heroes like Captain America and Thor, as well as experience the returning Iron Man Tech Presented by Stark Industries.  Both experiences will be available for guests later this year.

Jedi Training Academy — A favorite of younger fans is reimagined with a new experience that includes new characters and a new villain to battle from the popular Disney XD series "Star Wars Rebels."

Season of the Force – This new seasonal event, beginning early 2016, brings new experiences to both coasts.  In Tomorrowland at Disneyland park, guests will explore the Star Wars galaxy with special entertainment throughout the land, themed food locations and more. Guests also will be thrilled to climb aboard Hyperspace Mountain, a reimagining of the classic Space Mountain attraction, in which guests will join an X-wing Starfighter battle. At Disney’s Hollywood Studios, guests will close out weekend nights with a new fireworks spectacular set to the iconic score of the Star Wars movies. 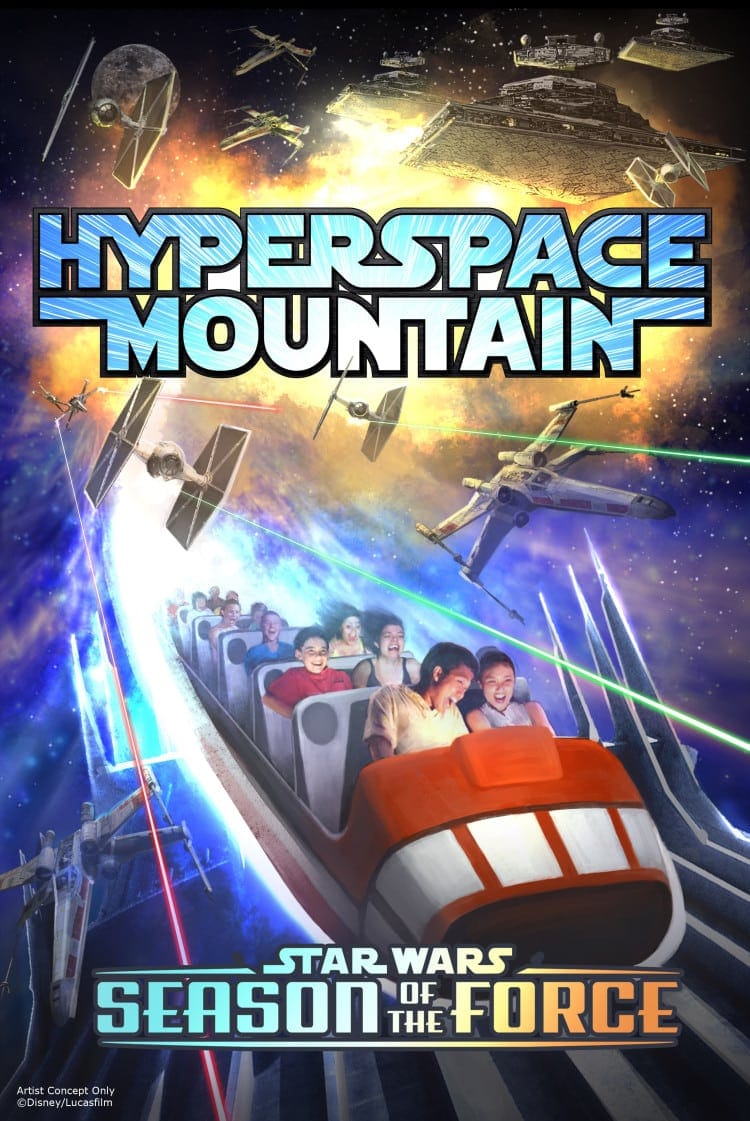 Rumblings of Pixar Land at Disney’s Hollywood Studios have be in the rounds for a while, so it’s only a slight surprise that the new land will actually be Toy Story Land.

The new 11-acre land will transport guests into the adventurous outdoors of Andy’s backyard.  Guests will think they've been shrunk to the size of Woody and Buzz as they are surrounded by oversized toys that Andy has assembled using his vivid imagination.  Using toys like building blocks, plastic buckets and shovels, and game board pieces, Andy has designed the perfect setting for this land, which will include two new attractions and one expanded favorite.

Family-friendly roller coaster – All on the back of Slinky Dog, this coaster will zip and zoom, plunge and coast as it takes guests on a fun, toy-filled adventure throughout the new land.

Alien saucers attraction – The famous little green aliens from the movie will take guests around for a spin in their very own flying saucers.  The music, lighting and sound effects add to the flurry of action, while “The Claw” looms over.

Toy Story Mania! – Guests glide into the Toy Story Midway Games Play Set  and take aim at 3D objects in a variety of fast-paced games, with an expansion that adds a third track to this popular attraction. 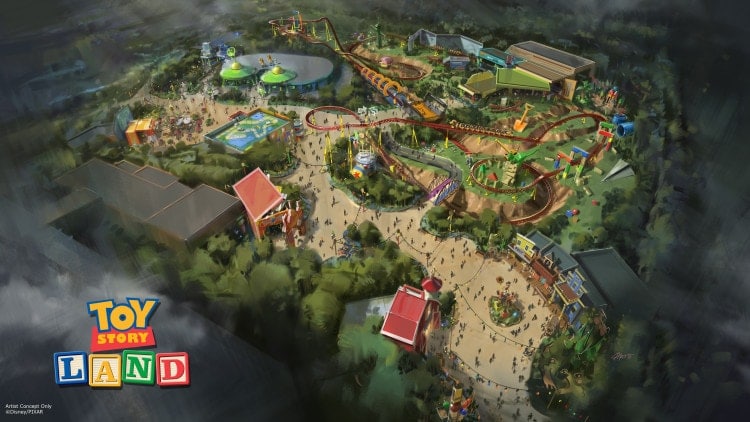 Pandora – The World of AVATAR

Disney’s Animal Kingdom is also getting its fair share of new entertainment experiences. The first is the highly anticipated Avatar Land, which was officially announced as Pandora – The World of AVATAR at the D23 Expo parks and resorts presentation by no other than James Cameron.

The new world will include floating mountains, a bioluminescent forest and the winged creatures known as Banshees, giving guests a transformational experience they will never forget. The name of the new E-ticket attraction was also announced – AVATAR Flight of Passage – which will be the centerpiece of Pandora, allowing guests to soar on a Banshee over a vast alien world. The spectacular flying experience will give guests a birds-eye view of the beauty and grandeur of the world of Pandora on an aerial rite of passage.

After Dark at Disney’s Animal Kingdom

In addition to Pandora – The World of AVATAR, Disney’s Animal Kingdom is also receiving new nighttime entertainment experiences, offering guests longer days than ever before to experience this one-of-a-kind theme park.

“Rivers of Light” – Expected to open next spring, “Rivers of Light” will be an innovative experience unlike anything ever seen in a Disney park, combining live music, floating lanterns, water screens and swirling animal imagery. “Rivers of Light” will magically come to life on the natural stage of Discovery River, delighting guests and truly capping off a full day of adventures at Disney’s Animal Kingdom.

Kilimanjaro Safaris – This popular attraction will be extended for a new nighttime adventure next spring, where guests will travel through the African savanna amid the magically extended orange glow of the setting sun and discover two species new to the attraction: African wild dogs and hyenas. 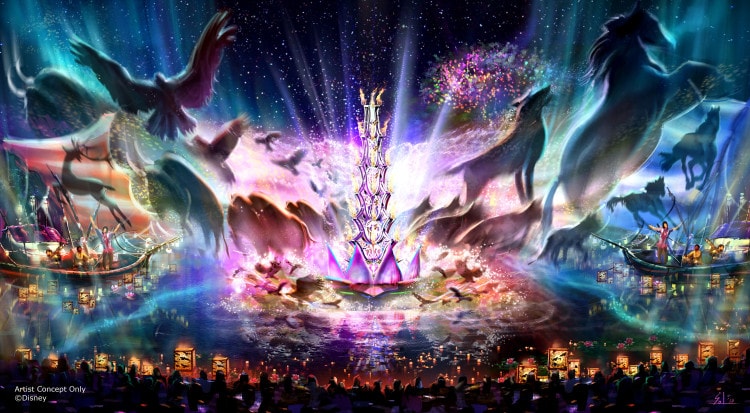 Soarin’ Around the World in Florida and California

An older attraction that I’m beyond happy to see an update to is Soarin’. Both Florida and California flight simulators will get a new themed landscape, covering some of the world’s most unique natural and man-made wonders - I’m hoping for new scents, too! Soarin’ Around the World is set to debut at Disney California Adventure in California and Epcot in Florida next year.

And speaking of Epcot, the Norway pavilion is undergoing an expansion to make way for the new “Frozen Ever After” ride. The area will feature character meet and greets and more.

I know this is a lot to take in for one post, but there is so much happening at both Disney parks and I didn’t want to leave anything out! I have a feeling we’ll be waiting for a while for the opening of the new lands, but it’s nice to see updates to attractions beginning later this year.

What new land or attraction are you most looking forward to?