Home >> Entertainment >> An Interview with Kristen Bell of Frozen #DisneyFrozenEvent

One of the highlights of attending the world premiere of FROZEN was interviewing Kristen Bell. I was already a big fan... I used to watch her on the TV show Veronica Mars, nearly 10 years ago (Crazy, right ... can you not wait for the movie?). Kristen has gone on to have a great career, including many comedies, which is one of the reasons I love her so much... she's ridiculously funny.

However, when you do these kinds of interviews you don't always get the same person on screen as you do off. But not Kristen Bell. She's even more awesome in real life ... She's a doll!  {Quite literally, even, you can purchase Anna of Arendelle right here}. Let's just say that if I could have a Hollywood BFF, it would absolutely be her. And after seeing the movie and meeting Kristen, I can absolutely see her personality in Anna.

Here's a peek at my interview with Kristen Bell, the voice of Anna in Disney's FROZEN. 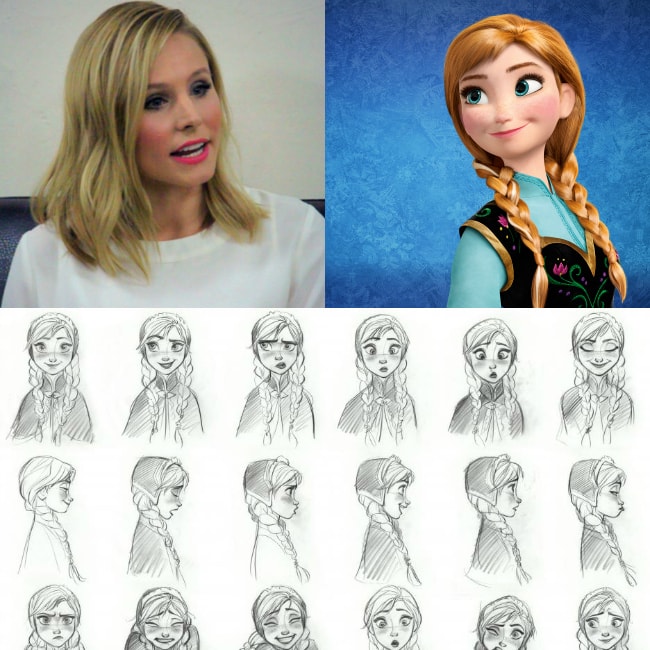 How did you get involved in the project?

I've always wanted to be in a Disney animated feature, like since I was four years old or five years old.  It was the first goal I had ever set for myself.  ... I auditioned for Tangled and after my audition the casting director pulled me aside and she said, "oh that was great and if we go another way", which I think she knew they were, "but I want you to meet Chris Buck because he's directing a project that's a few years down the line called The Snow Queen, and I think you’d be right for it".

Did the musical aspect of it scare you?

No, that was what incited me to want to do it, because I studied music in college and I trained operatically when I was a little girl ... and I love musical theater so, so, so much.  I've done a couple Broadway musicals and I try to keep music as relevant as possible ... and it really just makes— it puts me in a mental state of happiness like nothing else, I think.  Really like nothing else.

What did you do to prepare for your role as Anna?

Uh, I didn't at all.  I came in with so many ideas. ... The inception of the script was much different than this script we have now.  And it went through quite a few rewrites and finding everything, 'cause originally they were mother and daughter.  And then they were sisters.  And then they weren't.  And then they had Elsa and Anna.  And then I think they just tried to figure out what worked the best for telling the themes of the story while using the Christian Andersen fairy tale as an outline.

And I knew exactly what I wanted to do going in. I was like, I don't want her to have good posture, I don't want her to like have dreamed of holding a sword her whole life.  I didn't want her to be one or the other of the archetypes that I was used to seeing.  And I just wanted  her to be who I wanted to see on screen when I was little, which is someone who talks too much and too fast.  And puts her foot in her mouth and is goofy, but really kind of likes people and being social and being positive. ... She's not rough and tumble, and she's not the girl who has her hair braided by birds.  She's really goofy, she's who I felt like I was when I was a kid.

Mommy Musings™ is a participant in the Amazon Services LLC Associates Program, an affiliate advertising program designed to provide a means for sites to earn advertising fees by advertising and linking to Amazon.com
38 shares