Since experiencing Mardi Gras in New Orleans last year, I am all about the Carnival Season. I suppose there's a chance I will return this year, but the next best thing has got to be Mardi Gras at Universal Orlando. I have yet to make it to this annual event at Universal Studios, but this might be the year. Laissez les bon temps rouler...

Mardi Gras at Universal Orlando runs from February 12 through April 23, 2011. 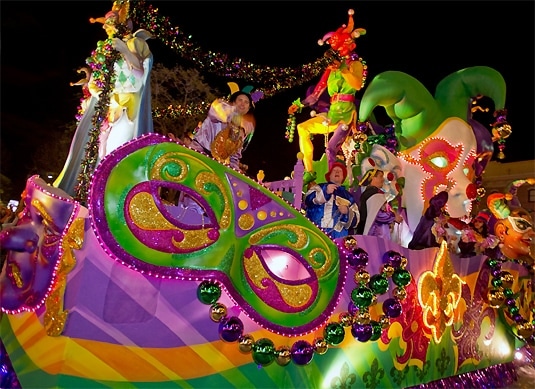 Universal Orlando has been creating its special Mardi Gras celebration for more than 15 years – bringing the perfect combination of the Big Easy and spectacular theme park entertainment to its guests all for the price of regular admission.

“If you can’t be in New Orleans or if you can’t get enough of Mardi Gras, then Universal Orlando is the place to be,” said Jim Timon, senior vice president of entertainment for Universal Orlando Resort. “We bring all of what makes Mardi Gras great together with national-level musical artists to create a family-friendly celebration that fills the entire theme park.”

This year’s special Mardi Gras concert line-up features some of the biggest names in Rock, Country, Pop and R&B.

Along with top-name talent comes the world-famous parade - straight from the streets of New Orleans.  One-dozen elaborate, hand-crafted floats designed and built by Blaine Kern Artists – the same company that creates floats for New Orleans Mardi Gras – will make their way through the streets of Universal Studios along with dozens of colorfully costumed performers and hundreds of float riders – all of whom throw beads to eager guests.   The parade, with its Fire, Air, Water, Earth theme, also features music and a nightly King and Queen of Mardi Gras.

Nearby, in the Universal Studios “French Quarter Courtyard,” the celebration continues.  This area will feature New Orleans-inspired food creations by Universal’s chefs – including jambalaya, Po Boy sandwiches and more.  And nearly one-dozen hand-picked, authentic New Orleans bands will perform the best of The Big Easy’s Blues, Jazz and Zydeco.

Mardi Gras is included as part of regular admission to Universal Studios.

For more information or to purchase tickets, visit www.universalorlando.com/mardigras.